​John enlisted on July 18, 1942, at Camp Forrest, Tennessee. He voluntarily enlisted, and the term of his enlistment was the “duration of World War II or any other emergency, plus six months, which was subject to change if directed by the President or the law.” John was assigned to the 388th Bomb Group and 562nd Squadron of the USA Air Force. John was a technical sergeant and his official role was a bomber. He was stationed in Knettishall, England. Unfortunately, he ultimately was killed in a plane crash at the young age of 28 on May 25, 1944.

The 388th Bomb Group
The 388th Bomb Group flew strategic bombing missions from Knettishall, Suffolk, from June 1943 until August 5, 1945. Throughout this time, however, detachments were sent to Fersfield, Norfolk, to conduct Aphrodite missions. In these Aphrodite missions, veteran B-24 bombers were filled with explosives and radio-controlled from another aircraft to crash-land on a specific target.

The 388th Bomb Group was formed in 1942, the year that John enlisted into the army. For the first three years, the group consisted of four squadrons—the 560th, 561st,562nd, and 563rd.The 562nd Bomb Squadron was activated on December 24, 1942, at Gowen Field, Idaho. The squadron moved to Wendover Field, Utah, on February 5, 1943, to begin training in the operation of B-17 Flying Fortress aircraft. From May 1, 1943, to June 7, 1943, the squadron was stationed in Sioux City, Iowa. In the summer of 1943, the group was stationed in Knettishall, England. On July 17, 1943, the squadron participated in its first combat mission in the European Theater of the world.

“Knettishall was built to Class A standard for an American Bomb Group that would be bringing up to forty heavy bombers with them in three or four Squadrons. The 388th Bomb Group, which stayed at Knettishall for their entire service in the ETO, flew B-17 Flying Fortresses on missions over occupied Europe. This involved crews flying full-loaded but worn-out B-17s to the edge of the British mainland before baling out and allowing a crew in another aircraft to radio-control the B-17 into the intended target.”(American Air Museum Site)

Hurdle was assigned to fly 26 missions, but only received credit for 22 because there were three aborts and the mission in which he was killed.
​
The 562nd squadron received the distinguished unit award for a mission in Germany on August 17, 1943. 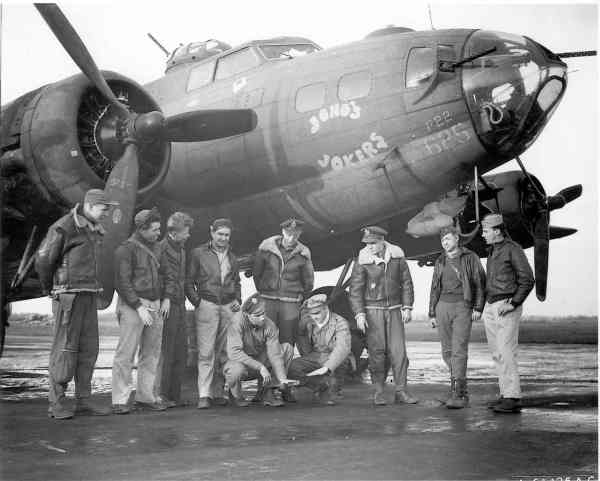