The South Reporter, the official newspaper of Holly Springs, reported on Tuesday, June 8, 1944, “Tech. Sgt. John Paul Hurdle, engineer and top turret gunner flying fortress, according to a War Department message Tuesday, is missing in action over France. The telegram received Tuesday afternoon by his wife, Mrs. Martha Woodward Hurdle of Holly Springs stated that he had been missing since May 25. The message was received here just as the family was leaving the union prayer service at the Methodist Church held by the people of Holly Springs to pray for our men and women in the invasion and the other theatres of war all over the world."

The irony of this situation is painful. One can only imagine the pain of Mrs. Hurdle as she received such heartbreaking news just after praying for the safety of her husband. At this time, James Cooper was only six years old.

The same news article recognized the bravery of John Hurdle, writing, “During the past seven months, this paper has had four news releases and a couple of pictures direct from an Eighth AAF Bomber Station in England telling of the citations for ‘courage, coolness, and skill’ displayed in the hard-fought missions by this Marshall Countian.”

It is clear that the humble town of Holly Springs held John Paul Hurdle in great respect for his actions in the war.

A week later, Tuesday, June 15, 1944, the South Reporter reported, “No further news has been received concerning Tech. Sgt. John Paul Hurdle, who was reported missing over France on May 25. Friends and members of his family are hoping that he may be held to eventually join the Allied troops invading France and not be taken a prisoner of war.”

Meanwhile in France, John’s body had already been discovered and buried. He was buried in an isolated grave on May 30, 1944, by a civilian of Poix, France. He was identified by the information on his identification tags. He was buried in a civilian cemetery in Poix, France, in Grave number 166. He was reburied in St. Andre Military Cemetery at Plot G, Row 7, Grave 126 on June 28, 1945.

Since his body was positively found, they notified his next of kin, Mrs. Martha W. Hurdle.
Martha was forwarded his possessions: a trench coat, one pair of low quarter tan shoes, one pair of slippers, one pair of moccasins, one pair of gunner wings, two fountain pens, a pocket knife, a leather money belt, two leather wallets, a cigarette case, a photo folder, an identification bracelet, and his air medal. Unfortunately, Mrs. Hurdle mailed the military that she never received such items. It is unknown if she ever received her late husband’s belongings.

Sometime later, his body was moved to Normandy American Cemetery. He lies in Plot D, Row 6, Grave 39.
John P. Hurdle received many awards for his actions. He received an Oak Leaf Cluster, an Air medal, and the Purple Heart award.

Family after his Death

After his death, John’s wife and son grew distant from his siblings and family. John’s father, Jesse Frank Hurdle was a demanding individual who was very authoritative over Martha after John Paul’s death. (Frank Hurdle interview)

Martha soon remarried after John’s death, which was not unusual for women in this era. She remarried Ralph Boatner Greer, who also was a World War II veteran. Boatner was discharged on January 12, 1946, and came to Marshall County. “When he returned home he said that he would never leave Marshall County again.” He married Martha, and they had one son together, Ralph Boatner Greer, Jr. Martha Hurdle died February 8, 2000.

James Cooper Hurdle is still alive today. He is 79 years old, and he is married to Emma Hurdle. He still resides in the mid-South.

Gravestone of Martha Woodward, widow of John Paul, who remarried after his death
Legacy Today

Today, the memory of John Paul Hurdle remains alive. His nephew, Frank Hurdle, has done extensive research on the details of John Paul’s death. Furthermore, a couple in France has adopted his grave, continuing to groom it and commemorate his life. 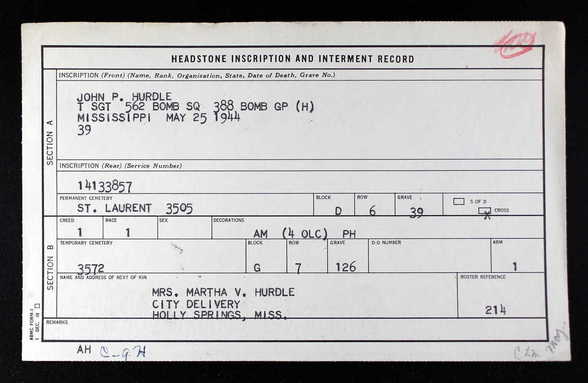